Metastases, the leading cause of cancer deaths, follow the same dynamics as a crowd moving through tight spaces: their capacity to propagate depends on the fluidity of their movement. An Italian study from IFOM and the University of Milan and published recently in Nature Materials integrates molecular biology and material physics to reveal that the ability or inability of cells to migrate collectively, and therefore of tumor cells to metastasize, depends closely on their density and fluidity factors. This could be a fundamental discovery, especially for solid tumor metastasis, where identifying a mechanism for “jamming” the cellular "crowd" could provide specific therapeutic targets that are keys to reducing cancer spread in the body. 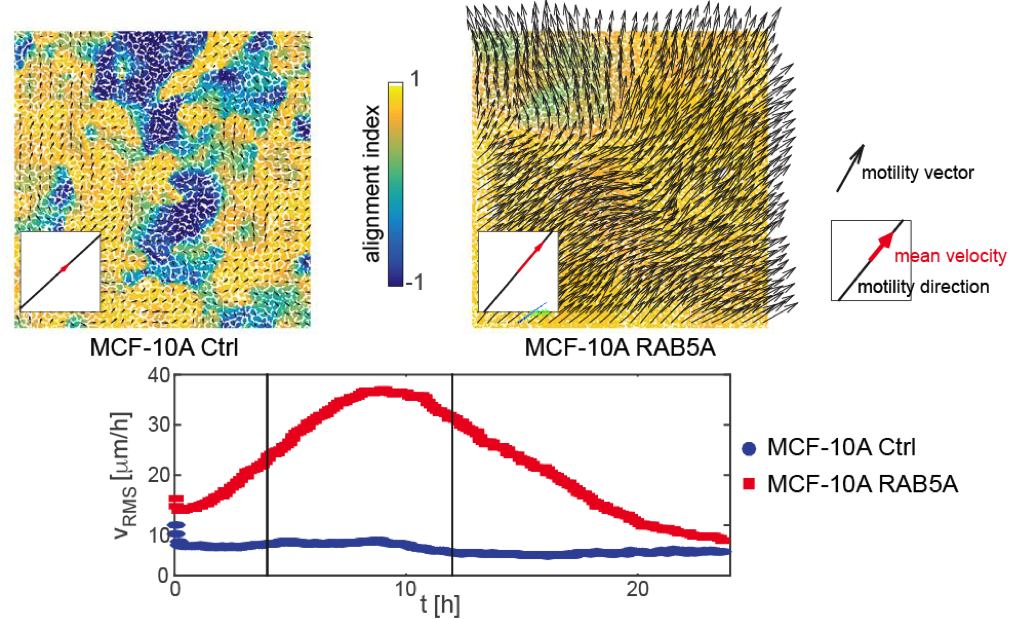 RAB5A re-awakens motility of solidified epithelia cells: left, cell monolayers undergo a solid-like transitions marked by the reduction of cell motility, represented by the arrows, and the emergence of small and heterogeneous patches of cell moving in different directions. On the right, the expression of RAB5A leads to a robust increase in cell velocity (longer arrows) and in a highly coordinated mode of motility represented by the homogenous colour (cell moving along the same direction have same the color)
See video

Milan, February 1, 2017 - They move in groups, in a coordinated way, just like a rush hour crowd passing through a narrow subway station tunnel can only flow smoothly if it forms a compact and organized stream. Analogously, cells use collective migration when tissues are formed during embryonic development or repaired in the adult organism, switching from liquid to solid and vice versa, depending on the need. For example, transition from a fluid to a solid state is required to develop the cellular properties needed for a barrier between the outside and the inside of a tissue and, on the contrary, acquiring a fluid state can allow the tissue remodeling that occurs in wound repair. When a tissue becomes solid it is immobile and refractory to tumor development, however, transition to the fluid state facilitates plasticity, which in pathological situations can be exploited for the metastasis of solid tumors, the most common human cancers. Virtually all epithelial tissues and solid tumors move in a collective manner, thereby achieving greater efficiency in invading the body through the interstitial tissues and giving rise to distant tumors. The laws governing multicellular movement and transitions between solid and liquid states are still poorly understood, as are the molecular and biochemical mechanisms that control them. A study recently published in Nature Materials by Giorgio Scita, head of the "Mechanisms of Tumor Cell Migration" research unit at IFOM and professor at the University of Milan, and Roberto Cerbino, professor of Applied Physics at the University of Milan, marked a step forward in our understanding of these mechanisms, thanks to a research approach integrating biology and material physics. "Over the past few years - explains Scita – it has emerged that tumor development is characterized not only by genetic alterations but also by complex and dynamic physical interactions that cancer cells establish between themselves and the surrounding tissue. The forces that allow cells to unite and move in a coordinated fashion, the way that cells communicate with each other, how they pass from a solid to a liquid state and vice versa are equally important but still obscure; we are trying to clarify these with the help of our colleagues in physics." 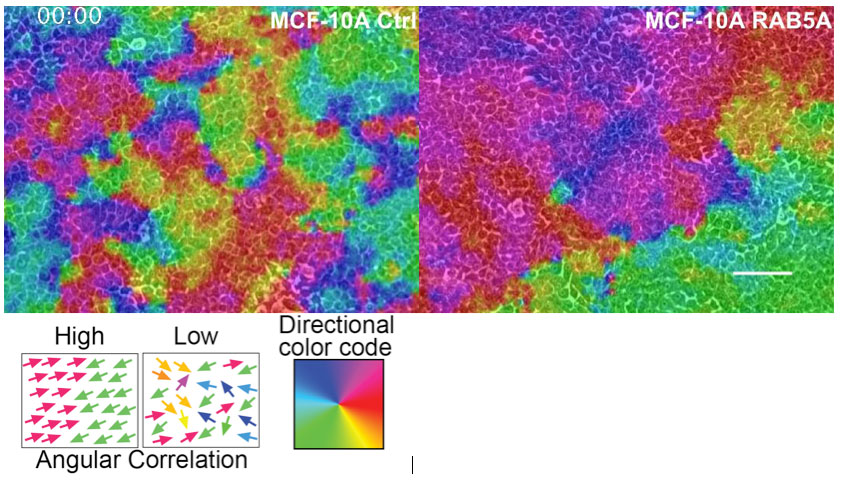 To understand the dynamic behavior of the cells in epithelial tissues, the Cerbino team has applied methods used to study materials consisting of inert particles. "At low densities - explains Cerbino - particle movement is disorderly and chaotic, very similar to that of water molecules. By increasing the density, the degree of freedom of each particle is limited and the system goes through a transition that is similar to the transition from fluid to a glass or solid that physicists often see following sudden cooling." However, cells are not inert, and to interpret their behavior the material physicists have used a two-dimensional model in which cells are represented by irregular polygons. In that model, the cell interactions are determined by the shapes that they assume, which in turn can be described by simple parameters such as their area and perimeter. "In the model that we developed - continues Cerbino - we have integrated this geometric description with a mechanism capable of reproducing the capability of cells to collectively migrate under certain pathological conditions, or to coherently orient the direction of movement of each cell in relation to its neighbor. It is a feedback mechanism similar to that which explains the collective motion of flocks of birds or the movement of crowds in emergency situations. Surprisingly, our results suggest that when a particular protein is present in excess, this geometric mechanism works very efficiently to promote collective cell movements."

In parallel, the IFOM researchers have investigated this protein RAB5A, which is an essential regulator of endocytosis, the process responsible for importing substances into the cell. Working at the cellular level, they have reproduced the typical RAB5A alteration seen in tumors by engineering mammary gland cells to produce high levels of this protein, similar to what is seen in aggressive breast tumors. Surprisingly, this simple manipulation was enough to "awaken" the motility of a cell population that had undergone solidification and to allow it to acquire collective smooth and flowing movement. Applying the physics techniques for analysis of inert materials to fluorescently colored cells expressing RAB5A allowed the scientists to monitor in real time both the collective movement and the changes in cell shape. By combining the use of sensors for interactions between cells with micro-fabrication techniques, it was possible to measure in real time the forces exerted by the group to move in a coordinated manner as they regain the ability to undergo collective motion.

"With light and electron microscopy techniques - explains Scita - we observed that a tissue that was silent and immobile from the kinetic point of view wakes up and forms swirling currents in the cell mass, allowing the cells to regain fluid and smooth motion that is, at the same time, coordinated." This same mechanism can occur in a tumor when metastases arise: although proliferating and solid, a tumor can reacquire fluid motion in the course of its development, for example if an endocytic regulator such as the one that we have identified in RAB5A becomes altered. If a tissue is more fluid, it can pass more efficiently through the interstitial spaces. This can occur in tumors: the more fluid they are, the more they metastasize. "It's the first step - concludes Scita - to identifying strategies for blocking this process and ultimately trying to control the ability of tumors to disseminate. The next experimental steps will be in the direction of validating mechanisms identified in complex three dimensional systems that mimic the growth and invasive capacity of solid tumors in the most faithful way possible and then identifying the molecular factors that regulate collective migration and determining if they can be used as new diagnostic or therapeutic targets." 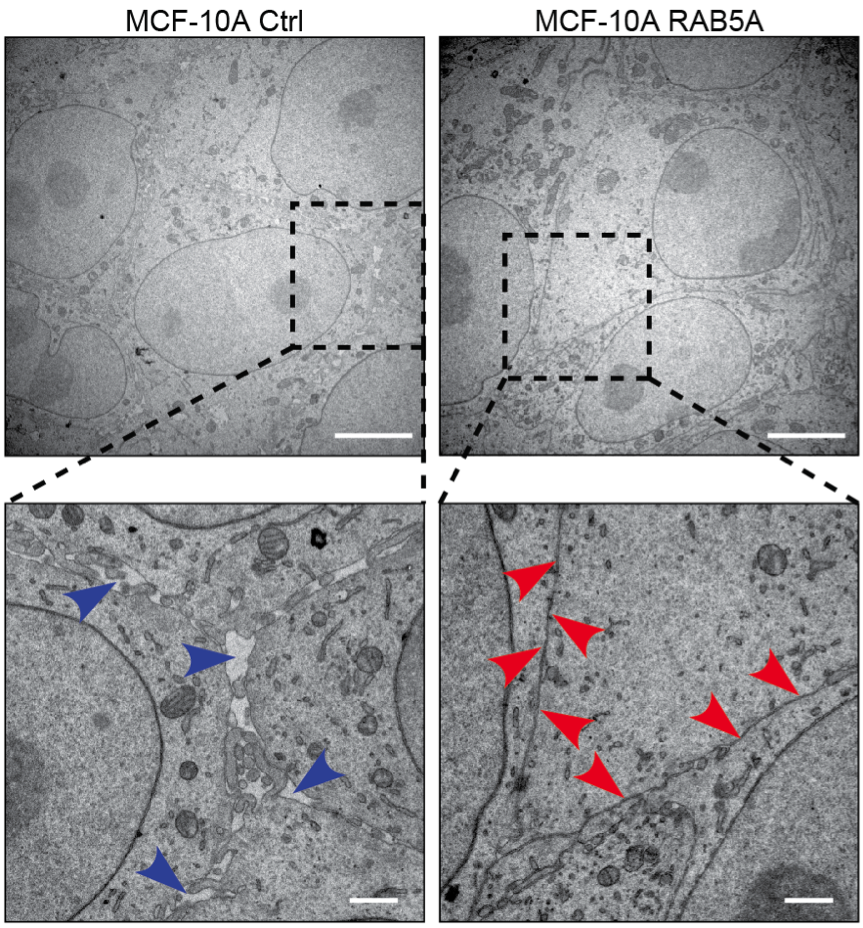 RAB5A increases the cell contact area. Electron microscopy images of a solid-like tissue (on the right) in which the interaction between cells is discontinuous, tortuous and characterized by intracellular empty space (Indicated by the blue arrowheads). A RAB5A tissue with fluid-like features instead presents tight and compacted cell-cell interaction (indicated by red arrowheads).

This research would not have been possible without the fundamental support of AIRC, the Italian Association for Cancer Research, the European Research Council and the Ministry of Education

GIORGIO SCITA - Cell biologist expert in cell movement dynamics, since 2001 Giorgio Scita directs the Mechanisms of Tumor Cell Migration research unit at IFOM. Since 2006 he is an Associate Professor of General Pathology in the Faculty of Medicine at the University of Milan. He has been involved in numerous studies that deepen our knowledge of the mechanisms by which cells sense the outside world and transmit signals, in response to which they change their behavior, especially migration. In particular, he was responsible for the discovery that highlighted the fundamental link between the ability of cancer cells to move in various ways, and the cellular process of endocytosis, traditionally considered to operate in completely different cellular functions. Author of over 100 publications, Scita is among the most productive and cited Italian scientists. Winner of a prized Advanced Grant from the European Research Counsel in 2011, he was appointed member of the prestigious European Organization for Molecular Biology (EMBO) in 2014.

ROBERTO CERBINO - Associate Professor of Medical Physics and Applied Physics in the Department of Medical Biotechnology and Translational Medicine at the University of Milan. His research group conducts experiments aimed at the optical characterization of soft materials, with particular emphasis on biological systems. Author of over fifty publications, collaborating closely with industrial partners, he participated in the European Space Agency’s GRADFLEX space experiment and is co-founder of the spinoff ProXentia.