Microcephaly: here is a protein that regulates brain development

For the first time, the role of the CEP63 protein in cerebral cortex development and in the etiology of the neuropathology known as microcephaly were demonstrated in vivo. The research, conducted by an international team coordinated by the FIRC Institute of Molecular Oncology in Milan, does not exclude the possibility of a link between the malfunction of this protein and the onset of tumors.

A study published in Nature Communications show, for the first time in vivo using a mouse model, that the CEP63 protein is fundamental to correct cerebral cortex development. Absence of this protein causes microcephaly, which is a reduction in the number of cells in the cortex, the part of the brain that houses the higher functions of mammals. 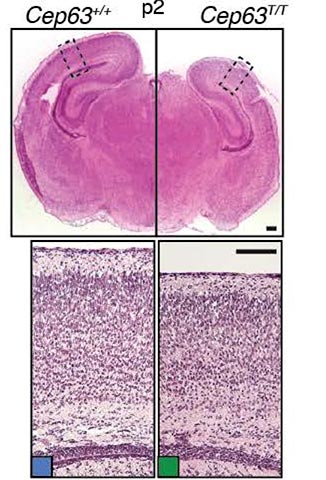 "The CEP63 protein is located on the centrosome, an organelle that controls formation of the mitotic spindle, the cell division apparatus. CEP63 appears to have evolved recently in vertebrate animals, as it is not present in simpler organisms. Studying it can help us to understand what happens when the mechanisms of cell division are altered", said Costanzo. In particular, CEP63 could play a key role in Seckel syndrome, a disease characterized by intrauterine and postnatal dwarfism, mental retardation and severe microcephaly.

On the left, the zone deep in the brain where the neurons of the cortex form in a normal mouse. On the right, the same area in a mouse lacking CEP63. The pink cells are dying because they have activated p53, which kills them because Cep63 is not functioning.

Costanzo has worked for years on the protein CEP63, which was first characterized by his research group in 2008. In vivo experiments were carried out at the Institute of Biomedical Research in Barcelona, while Costanzo’s group at IFOM conducted the molecular analysis. The results showed that in the absence of the CEP63 protein, the cells that form the so-called neuronal precursors of the cerebral cortex begin to die, resulting in microcephaly. In particular, mice lacking the protein exhibited an alteration in asymmetric division, a process typical of neuronal precursors and common to other cells, including germinal cells and some cancer stem cells. In this case, the elimination of CEP63 rendered the mice microcephalic, due to the lack of neurons and sterile, due to a defect in gamete development.

Given the role of CEP63 in controlling cell division, there may be a link between the failure of CEP63 and tumor development: Costanzo’s laboratory at IFOM is working to identify these connections. The effects of the loss of CEP63 are cancelled if, at the same time p53 is inactivated. P53 is the so-called "guardian of the genome" because of its role as a tumor suppressor (p53 is mutated in 50% of human tumors).

These are mouse germinal cells. On the left, in normal cells the ends of chromosomes colored in red are all distributed in an area of the cell to form the "Bouquet". On the right, in cells lacking CEP63 the Bouquet does not form, and the resulting lack of functional gametes causes sterility.

"We already knew that p53 is able to recognize DNA damage, but now we hypothesize that it can do the same with alterations to the mitotic spindle, which is frequently altered in cancer cells: this would show that it is linked to CEP63, which regulates the positioning of the mitotic spindle during cell division", said Costanzo. If this hypothesis is confirmed, regulating the biological interaction between CEP63 and p53 could be useful for controlling the proliferation and development of many cell types in vertebrate organisms. 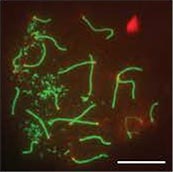 These are chromosomes in meiotic germ cells that lack functional CEP63. Some of the chromosomes, stained with green, are fragmented instead of having the normal rod shape.